A downloadable tool for Windows and Linux

Bitmapflow is a tool to help you generate inbetweens for animated sprites. In other words, it makes your animations smoother. It uses optical flow to try to guess how the pixels move between frames, and blends them accordingly. The results are far from perfect, and probably require some editing by hand afterwards, but sometimes it can produce decent results.

See the video tutorial on the sidebar for a quick guide on how to use it.

If you use big sprites with lots of frames, you may need to wait a while after tweaking the parameters for the processing to complete, since calculating optical flow can be quite CPU intensive.

A short explanation of the parameters follows.

You'll need to experiment a lot to find parameters that work well, although the default parameters seem to work decently for a lot of sprites. See my video tutorial on the subject.

The algorithm works best for sprites that only have movement in the two-dimensional plane. That means, things only move horizontally, vertically, or diagonally, not towards or away from the viewer.

Additionally, the algorithm assumes the brightness of pixels doesn't change between frames. That means, things like explosions, particle effects and blinking lights won't work that well, because they generally start bright and become dimmer over time.

Finally, if you feed pixel art into the program, make sure the pixel art isn't upscaled. It should be at its original resolution.

On Windows, the program crashes after the splash screen, or I get an error about vcruntime140.dll not being found. What to do?

On Windows when exporting I get an error similar to "Failed to save spritesheet as [directory and name]; Access is denied (os error 5)."

I get some weird OpenCV error about sizes or something after loading my sprite?

Feel free to use the program for non-commercial and commercial purposes.

The source code is licensed under MIT. The example sprites used in the promotional material (also available in the examples folder on Github) are licensed as follows:

I just found out about this program today! Props for the awesome development. Tried it out on a quick animation of mine and I am super impressed.

However I found a funny bug. I realized that you can put equations into the fields, and generally seemed foolproof until I did a typical QA response of dividing a number by zero and CTDed, losing my project. Hopefully no one else will do something as stupid.

Really awesome program! There are some big problems with being able to actually export PNG spritesheets, though:

About 3: have you tried:

Thanks for the response--setting an exception in Avast fixed issue #3! :D

While I'm here, I have a few more bits of feedback for you that will dramatically improve peoples' workflow using this program:

Thanks for a great program; I look forward to seeing it develop further!

Thanks for the great feedback! I'll be sure to write it all down.

Wow, cool as ice dude, thanks for making life a bit easier. Cheers. Just had to add an exception to Avast to get it to save output.

and a mac ver pretty please ^_^

I love this but it won't let me export - I keep getting an OS error 3? "System cannot find the path specified"

Also - is it possible to set a default folder where I could export to? It keeps trying to save to the program files folder - in the Gamesfromscracth video - Mike exports to his desktop?

Try placing the program into another folder (including all other included files), e.g. put it in your Documents folder, then try exporting again. (If you put the program in Program Files you may run into permission issues so don't do that).

The default export folder is the location where you extracted the zip file and ran the program.

Update: turns out this is a bug, you can fix it by ensuring that Bitmapflow and your export folder are on the same drive. (e.g. both paths start with C:/)

I'll publish a fix for this soon.

Thanks for the reply, I'll give that a try.

Version v1.0.1 is now available, it should fix this bug.

If I try DenseRLOF on a low resolution Sprite sheet, it will not progress and the complete percentage will stay at zero, and crash the software. I purposely crashed it with task manager open and the memory of the software skyrocketed to 4,000 MB. I had to close it out in task manager before it got too full. SimpleFlow works fine though and the program is crazy useful.

That's a known issue, this is an issue in the library I'm using so I can't do anything about it. Although I guess I could add a minimum sprite resolution...

Got it, I'm not sure if said min sprite resolution is different depending on the system, maybe you could do something check for a "memory overload".

Looking forward to the Linux version :)

I can't get it to load anything. If I choose spritesheet and select an image, it says the image is "0x0" dimensions and nothing loads. Same with GIF - nothing displays.

I don't get any error messages or anything. Not sure what's wrong.

1. Have you tried loading individual frames too? Does that work?

2. Do you have an antivirus active? If so try disabling it.

I tried loading some images as individual frames, and yes that worked immediately.

And similar with loading GIF, except the "before" and "after" windows are just blank.

Seeing as the Individual Frames mode works fine, my guess is that this is some sort of bug.

EDIT: I found out exactly what's causing the problem.

I had a hunch it might have to do with different Drive Letters, and it does. I like to place my portable apps on an external thumb drive located at "Z:\TOOLS\" so this program would be located in "Z:\TOOLS\BitmapFlow\BitmapFlow.exe"

To confirm that it was indeed an issue with the drive letter, I copied over BitmapFlow to the "C:" drive -- to "C:\BitmapFlow\" precisely.

Once it was in the "C:" drive, the exact opposite happened, as I predicted -- only GIFs and spritesheets from the "C:" drive would load, and it would no longer load images from the "Z:" drive.

So there's a bug in your code when reading files where it assumes that the files loaded are on the SAME drive letter as the program itself. So if I have your program located at "Z:\TOOLS\BitmapFlow\BitmapFlow.exe" and try to load a file located at "C:\test\sample.gif" -- my guess is that it tries to load "Z:\test\sample.gif" instead -- which this file path doesn't exist, so it fails to load anything (thus a 0x0 image dimension).

Oddly, this bug doesn't seem to happen when loading as "individual frames". So you may have either used a different code there, or fixed it there and not ported the fix to the other methods.

Thanks for letting me know, I'll look into it.

This should now be fixed in Bitmapflow v1.0.1.

I just downloaded the new version and tried it out. File loading definitely works now! Thanks for the quick fix! This is a pretty useful app.

Don't load the image from a zip file, extract it first

That's definitely an issue with most programs, generally. But that's not the issue in this case. I was able to figure out the issue and posted about it in another reply.

Fantastic now I can make all those rpgmv sprites go from 3 steps to 9 steps.

I waited so long for something like this. All the other auto tween software was either waay too expensive or difficult to use. This kind of software helps people with wrist strain and time restrictions so I needed it, and I do hope it will continue to develop.

I can feel you bud, my carpal tunnel has gotten so bad, I always end up procrastinating

Yeah it sucks to have wrist problems when you really want to still create. I do hope this type of tech. will help though.

When I save the animation, it shows this error: "Failed to save spritesheet (os error 5)".

Does it work when you save an animated gif? And what about individual frames?

No, it does not work at all neither for animated gifs nor for individual frames. I can't save anything.

That's strange... Are you running out of disk space, perhaps? Or are you on a computer with restricted privileges? (e.g. a school computer?)

Ok, now I found the problem! It was my antivirus that blocked the saving process. I'm sorry if I thought this was a bug of your software.

It's okay, glad you solved it!

I had the same problem, had to add an exception for the bitmapflow folder in Avast Antivirus program. Cheers for the hint.

This is ABSOLUTELY insane!

Thank you so much for making and sharing this. 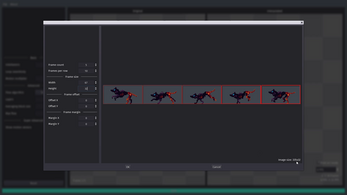 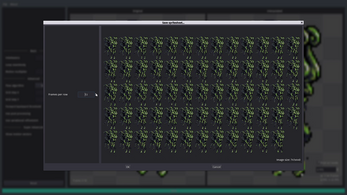